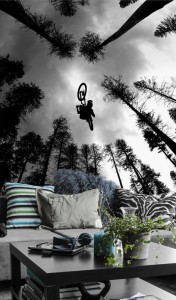 Photography is normally a sort of “window on reality” through which the photographer attempts to show something with the message “This is how it is. However bizarre it may appear, this is real life.” Constructed images abandon this conceit; a constructed photograph is formed by creating a finished picture out of several separate elements. Think of it as in some ways like cinema or theatre; the photographer acts as director choosing location, lighting and actors.

To the left you see a beautiful picture of a biker far above the ground. You can use it as a photo wallpaper mural.

Photomontage is one form of constructed photograph, and possibly the best-known; different photographs are amalgamated. That form of constructed photograph has been around since the earliest days of photography. Today a more common approach is to create an image that conveys a message for advertising or political reasons. An example would be the photograph that went viral in the early days of the “shock and awe” bombing of Iraq, showing a man holding up a poster accusing opponents of the war of being “morans”. The misspelling of the word “moron” was intended to show that those who supported the bombing of Iraq were uneducated and unintelligent. Much later it was revealed that the photographed man was actually an opponent of the war and that the misspelling was intentional. This sort of approach exploits the widely held belief that “the camera never lies” (which, of course, it does – regularly). Read more about constructed photographs at brighthub.com.

Post-mortem constructed photography was a practice common in Victorian times when a recently dead family member (at least, one hopes the death was recent) was photographed fully dressed and as though alive in the company of other family members.

The easiest way to construct a photograph is through the use of multiple negatives, where the artistic operation takes place during development and not in the setting of the photograph, so this is one form of photography that has not been advanced by the digital revolution. Something else that was popular in Victorian times was the “tableau vivant” or living picture in which people would stand in poses reminiscent of famous pictures.